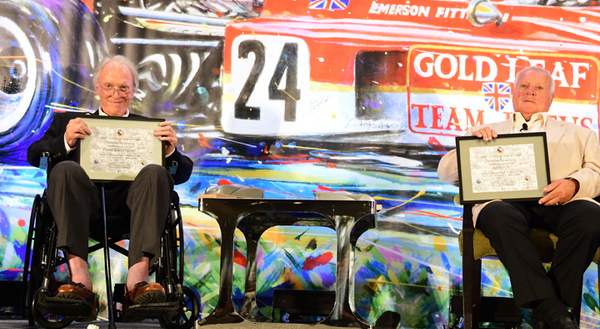 The racing legend has passed.

Dan Gurney, 86, died due to complications from pneumonia today. He had become physically frail in the past few years, but his mind was still as acute as ever. As he wished, Gurney’s funeral services will be private.

Gurney, the sole American driver to win a Formula 1 race – at Spa in 1967 – with a car of his own design and construction, was an acknowledged master of all aspects of motorsport. His acuity behind the wheel, his ingenuity in the workshop and his ability to understand the politics of racing were beyond that of his contemporaries. He could win in any aspect of the sport: in open wheel, sports cars, NASCAR – if it had wheels, he would master the discipline.

Daniel Sexton Gurney, the son of an accomplished opera singer, was born April 13, 1931, and won races in Trans-Am, Can-Am, NASCAR, Formula 1 and Indy cars. Once he retired from driving, Gurney dedicated himself to the design and construction of race cars and motorcycles, notably his self-designed Alligator motorcycle. His All American Racers’ (AAR) Eagle Indy cars were amongst the best of the best in the 1970s and through to the 1990s.

In all, AAR Eagles have earned 78 winner’s trophies over the years, including the Indianapolis 500, the Rolex 24 at Daytona, the Mobil 1 12 Hours of Sebring and eight championships in so many disciplines. Dan Gurney’s All American Racers Toyota-powered Eagles were dominant in IMSA’s GTP class in the early 1990s, at one point winning 17 consecutive races and taking back-to-back driver and manufacturer championships.

Personally, Gurney’s 351 racing starts brought him 51 victories and 47 podiums. He drove more than 50 makes of vehicle and in excess of 100 actual vehicle models as he competed from his beloved California home, throughout the United States, Canada and in Europe.

The driving highlights of Gurney’s career include that Belgian GP victory at Spa Francorchamps in 1967, when he became the first driver to spray champagne in celebration. In all, Gurney won four grands prix in 86 starts, driving for Ferrari, BRM, Porsche, Lotus, Brabham, McLaren and his own, AAR Eagle team. He also won the 1967 24 Hours of Le Mans co-driving a Ford GT with A.J. Foyt and the duo celebrated the 50th anniversary of that victory this past April at Long Beach.

Gurney’s 1979 “White Paper” delineating the means to a healthy American open wheel series paved the way for Championship Auto Racing Teams (CART), and his ideologies moved CART forward to where it became a challenge for NASCAR to usurp the open wheelers, which they eventually did when open wheel racing became fragmented in 1996.

Gurney is also known for his “Gurney flap” aerodynamic insert for the rear wing of an Indy car that added stability to these track-going missiles. His genius in stepping outside the box in the design and construction of racing cars and parts cemented Gurney’s reputation as a true Renaissance man in the motoring world. He was respected for his talents in finding the right solutions to most any problem

Dan Gurney’s contributions to the racing world span the spectrum. He was involved in all aspects and made friends in every discipline. He’s survived by his wife Evi and their two sons – Justin, the current president of AAR and Alex, an accomplished racer himself. Gurney’s children from his first marriage are John, Lindy, Danny and Jimmy. Gurney’s family requested any donations in his name go to Hoag Hospital Foundation, Newport Beach, Calif.